Our funeral home has been a family owned and operated business since 1931. The year 2019 brings us to our 88th anniversary of service to the community! The funeral home was founded by DeWitt Donaldson and was originally located on Main Street, near the Laurel train station. The business moved to the Talbott Avenue location in 1952. The building has gone through many changes over the years with a major expansion and renovation in 2000.

We are large enough to give our families the same service as the largest funeral homes around, yet we are small enough that each family gets the level of attention and care they deserve.

In June 2003, the Donaldson family opened their second funeral home in Odenton, MD. This new facility is a one level, completely accessible funeral home. An on-site crematory eliminates the need for unnecessary transportation to a third party crematory. For those who desire to witness the beginning of the cremation process, a room with a window looking into the crematory area is provided for their privacy and peace of mind. We also offer pet cremations, which are performed in a similar crematory designed for animals.

In December 2017, we opened our third location in Clarksville, MD. Situated on Rt 108, the funeral home is easily accessible to the residents of Howard County. This two story building is handicapped accessible.

In 1938, Wm. H. Anglin published an Album Representative of Laurel's Official, Financial, Professional and Business Interests. In it is the following entry:

DONALDSON, DeWITT--Born in Laurel, Md., May 9, 1900. Educated in public schools. Received B. S. degree from University of Maryland. His first business was electrical contracting, which he still follows. In 1931, after working four years with the late E. N. Fisher, he passed the State examination and was duly awarded a license to follow the profession of funeral director, which he has been doing for the past few years. He is a quiet, unassuming young man, believes he knows his business, gives service when it is needed most, and is available at all times. His phone is Laurel 17-J. 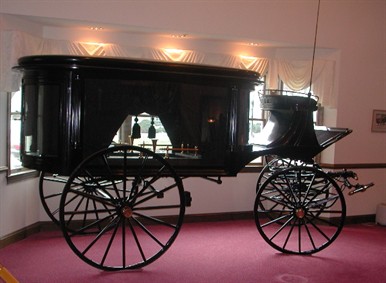 This horse-drawn hearse was built by the Crane and Breed Manufacturing Company of Cincinnati, OH, probably in the 1880's. Along with horsedrawn hearses and ambulances, Crane and Breed was well-known in the 19th century for its metallic coffins, sometimes weighing as much 100 pounds. The company put out a line of promotional paperweights and other items that can sometimes be found for sale on eBay. In 1909 they introduced the first commercial auto hearse.

The Donaldson Funeral Home purchased and restored the hearse during the 1990's. It was used for several funerals and parades before being put on permanent display at the Laurel location.